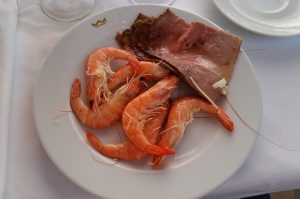 Mediterranean gastronomy means the set of typical dishes and preparation methods found in the Mediterranean basin, especially in southern Europe. The cuisine of this region began to be considered as a whole from the publication of the book A Book of Mediterranean Food (1950), by the British writer Elizabeth David. In keeping with David, the Tunisian historian Mohamed Yassine Essid says that the three central elements of Mediterranean gastronomy are olive, wheat and grape; since these are used, respectively, in the preparation of olive oil, bread and dough, and wine. The geographical area of ​​the Mediterranean cuisine can be delimited according to the extension of the olive tree, as indicated by David and Essid.

Fish and shrimp, served with rice, salad and pita bread

8 pieces of grape leaves stuffed with rice and vegetables serve with salad, rice and tzatziki sauce

House Wine By the Glass

Is this your business?